This sweet and creamy Instant Pot mung bean pudding is a popular Indian dessert called moong dal payasam and my vegan version gets its amazing texture and creaminess from coconut milk! This recipe is also gluten free and refined sugar free!

Happy Sankranti, Uttarayan, Lohri, Pongal and Bihu to everyone celebrating! ❤

Flavors in this moong dal payasam

This moong dal payasam is a popular recipe in the south of India, especially in the coastal states where coconuts are grown in abundance and coconut based desserts are quite common. This delicious dessert is called 'Vorn' in Konkani, the language that I grew up speaking and is quite often made during festivals and special occasions in Mangalore (where my family is from)!

The coconut milk adds the most luxurious creaminess to this pudding and when you taste it, you will definitely be surprised that no dairy is used in this recipe. Apart from coconut milk, the other flavors traditionally used in this recipe are jaggery (unrefined sweetener made from sugarcane juice), ground cardamom and ghee. The jaggery  adds a rich sweetness with a deep molasses like flavor and color to this pudding while the ground cardamom adds an amazing floral aroma. I wanted to make a vegan version, so I've replaced the ghee with coconut oil instead. Feel free to use either of these options.

Traditionally, this payasam is made by slowly cooking the lentils in simmering coconut milk until it turns soft and creamy Although, I love the traditional version, I don’t always have the time to slowly cook the lentils, which led me to develop an easy hands off recipe that takes very little time to make and doesn’t require a lot of stirring!

I absolutely loved how quickly this moong dal paysam comes together in the Instant Pot and I didn’t need to stir it often. I first pressure cooked the lentils and tapioca in the instant pot and then added all the other ingredients to this pudding. It only takes about 5 minutes of stirring to bring this dish together.

If you don’t have an Instant Pot, you can make this dish in either a regular pressure cooker or in a pot over the stove. I have provided the instructions for both in the recipe card below.

Cardamom is the primary flavoring spice in this creamy pudding. If you don’t like cardamom, I think both cinnamon and nutmeg would be nice replacements for cardamom in this recipe. You definitely need a spice that can compete with the strong flavor of the lentils.

I love the crunch from the cashews and coconut slices and pops of flavor from the juicy raisins in this recipe. If you are allergic to nuts, you could replace them with sunflower or pumpkin seeds in this recipe.

The tapioca (sabudana) helps in thickening the pudding and adding a lovely chewiness that is a fun contrast to the crunchy nuts and juicy raisins. If you don’t like tapioca/can’t find it, you can replace it with extra lentils instead.

This moong dal payasam can be stored in an airtight container for up to 5 days in the refrigerator. Both the lentils and the fat in the coconut milk will cause it to thicken considerably when chilled, so loosen it with a splash of water and then serve it either cold or warm. You can re-heat it either in the microwave or on the stove top until it gets warm before serving.

Love this recipe?Rate the recipe by clicking on the stars in the recipe card below 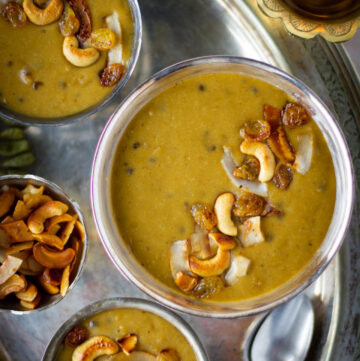 Making the toasted cashews and raisins

I hope you like this recipe as much as I do. Please leave a comment below to let me know what you think and subscribe to my social media if you would like to see more easy and delicious recipes.

Hey! Thanks for stopping by and welcome to my little corner on the internet!

Learn more about me here.

Sign up to the weekly newsletter for Viola's latest recipes!